September/October 2018 –
Greetings from Bonaire!  We sailed over from nearby Curaçao last week, and in no time at all, have dropped back into our June routine of daily swimming and (free)diving.  After one asphalt-melting month spent doing boatwork in Curaçao (save for time spent with our loving parents, who shared their gloriously air-conditioned hotel rooms during their recent stays), the fresh breeze now swirling through the Bonaire mooring field at night is a godsend.  It is from here that we plot Contigo’s next campaign through to-be-determined Caribbean waters.

We go back in our summer-adventure recap to Thailand, which was our next stop after Japan.  After a quick flight to Bangkok and a water-logged walk to our hotel, our ambitious plan to eat deliciously spicy street food (and maybe stay up all night?), landed in our present, mid-30’s reality.  Yes, we committed a sin in the eyes of many travel/food lovers whose opinions we value: we basked in hot showers, tucked into a Peking Duck at the hotel’s restaurant, donned plush white bathrobes, and called it a (quiet) night in Bangkok.  The next morning, one Phuket flight, taxi-ride, and ferry passage later, we arrived on the peaceful island of Koh Yao Noi.

Koh Yao Noi is decidedly low-key as far as islands in Southern Thailand are concerned. A majority of the population is Muslim, making most of the island “dry,” which acts as a powerful RAID-like deterrent to the full-moon party crowd.  That’s not us anyway (see Bangkok above), so we weren’t at all troubled by this last minute development. 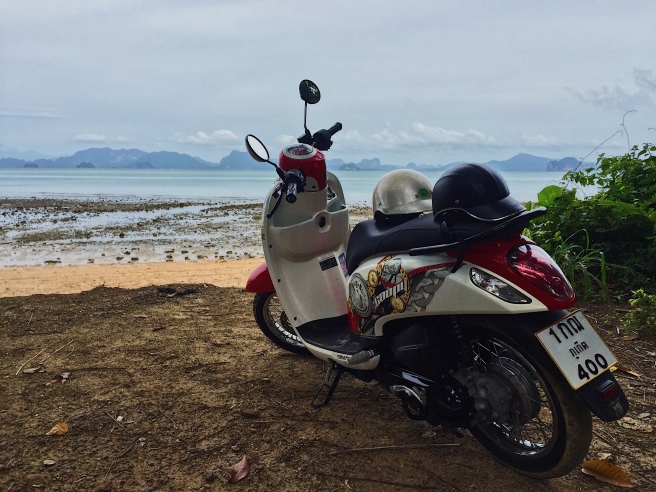 We rented a scooter from our lovely host at The Simple and zipped around the island, patronizing every Thai foot massage establishment we happened to come across, and conducting a deep survey of the island’s Tom Kha (coconut milk soup with vegetables) and fresh smoothie scene. 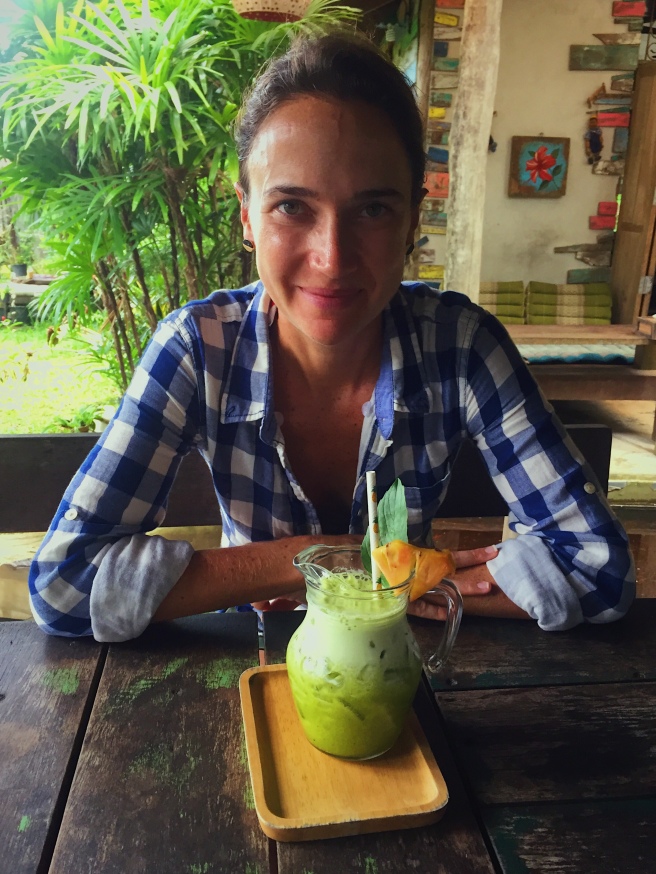 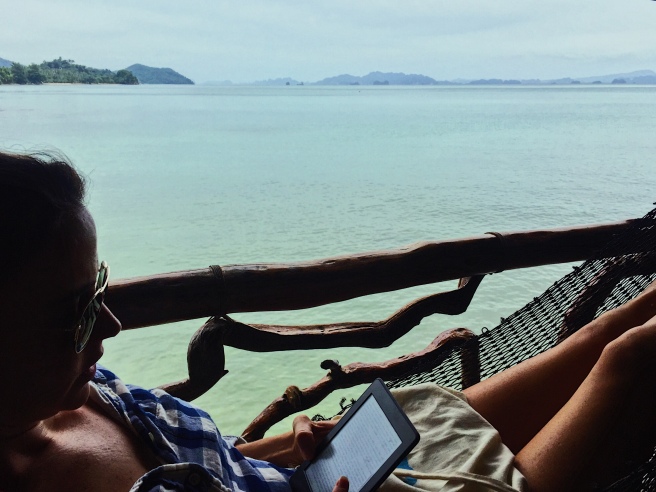 After Koh Yao Noi, we spent a few days back in Phuket exploring  the Old Town, where we found a stylish tea shop (and where Conner’s love of Pu’erh truly blossomed).  In general, we very much enjoyed our time spent in the Old Town and its historic restaurants, partially restored colonial architecture, and newly opened boutique shops.  (We did not bother going to Patong Beach, which has an altogether different vibe.) 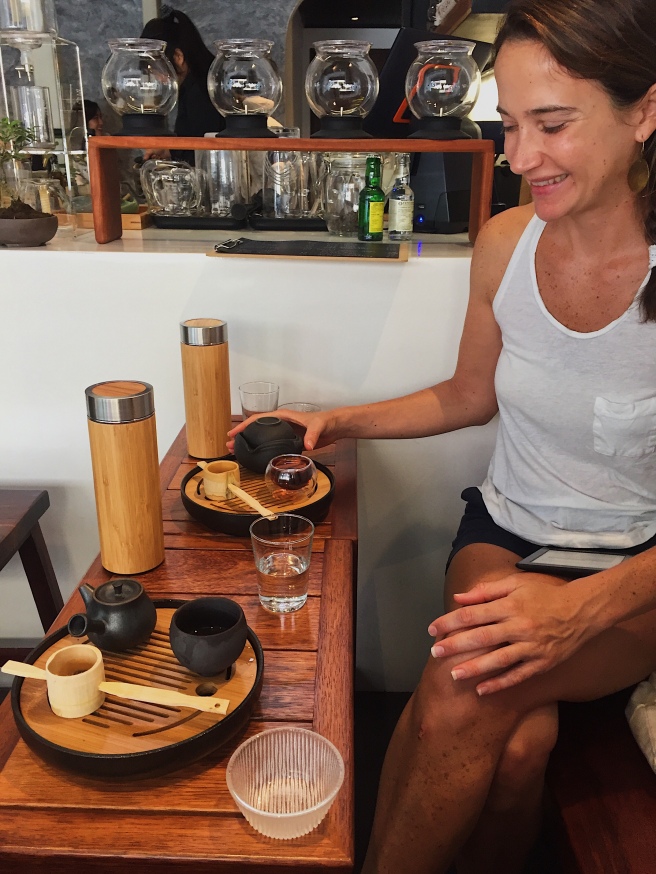 On the grooming front, an ambitious Thai barber turned Karl’s unkempt scruff-of-a-beard into a tightly manicured mustache + chin-strap fashion statement.  When the barber then asked to take several promotional pictures on his iPhone, Karl didn’t have the heart to order a full shave (and end the charade).  So groomed as such, back to the AirBnB Karl went; his first words to Conner when he he returned: “Don’t worry, I’m taking care of this!”  The first night, the chin strap came off, which left Karl with a primo opportunity to wander the Old Town spouting Italian-sounding nonsense for a night. 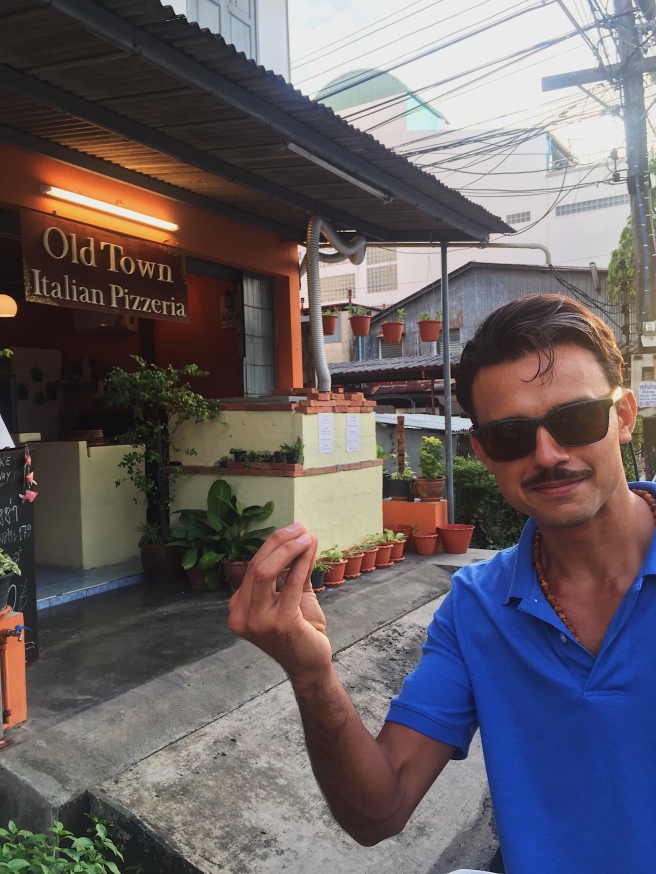 We know what you are thinking: all this time on land has made us a bit soft and hedonistic: daily massages, hammock naps, and the taste of fresh coconut.  Where are the Karl and Conner who take apart and reassemble marine toilets before breakfast? Rest assured, the next leg of our adventure was probably the hardest thing either of us has ever done.

We will begin by saying that if (a) you have a meditation practice, and (b) can take 10 days of “off-grid” vacation from work (we acknowledge this second one is a big IF), then we highly recommend finding your nearest Vipassana center and signing up for a retreat!  It was challenging, painful, beautiful, and mind-opening all at the same time.

All smiles on the comfortable bus to the monastery! 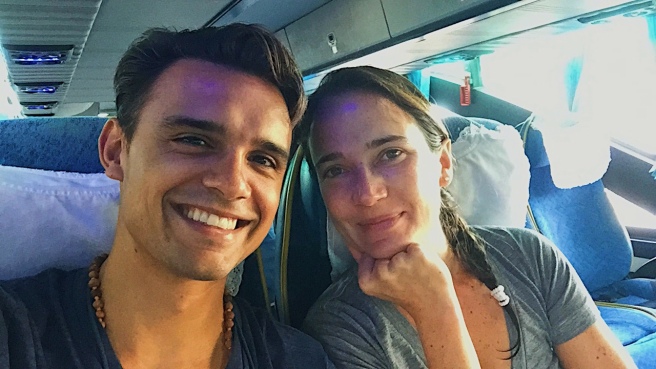 Vipassana (Pāli for Insight) retreats are typically structured as ten-day silent meditations, with a focus on breath awareness meditation and varying levels of Theravada Buddhist teaching.  There are many variants on this formula, and ours (hosted by Wat Suan Mokkh) was assembled in the tradition of Thai forest monastery ascetic practice. 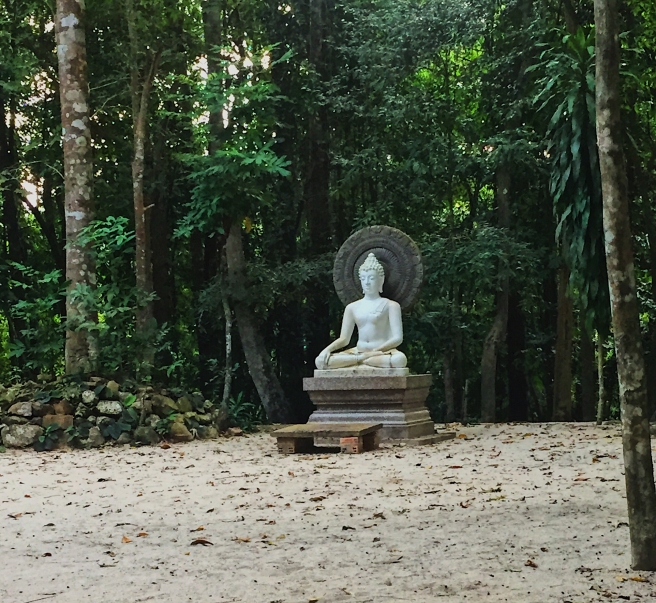 Like our month spent in Rishikesh (India) last year, the significance of our time spent at Suan Mokkh is hard to put into words.  Aspects of the practice were straight forward:

The sum total of the practice (the above is admittedly an over-simplification) delivers truckloads of body pain, mental suffering/restlessness, exhaustion,  and discomfort.  OK, this sounds terrible, why do any of this, you might ask?

Our own answer (your mileage may vary) is that the alchemy of all these factors cultivates a turbo-charged environment for personal inquiry that delivers significant amounts of “aha! moments” in a span of only ten days.  It is as if all the “low-grade” dissatisfaction that hums in the background of conventional human existence is suddenly thrust to the forefront, which is quite painful, but also makes it harder to ignore (and therefore easier to acknowledge and address). 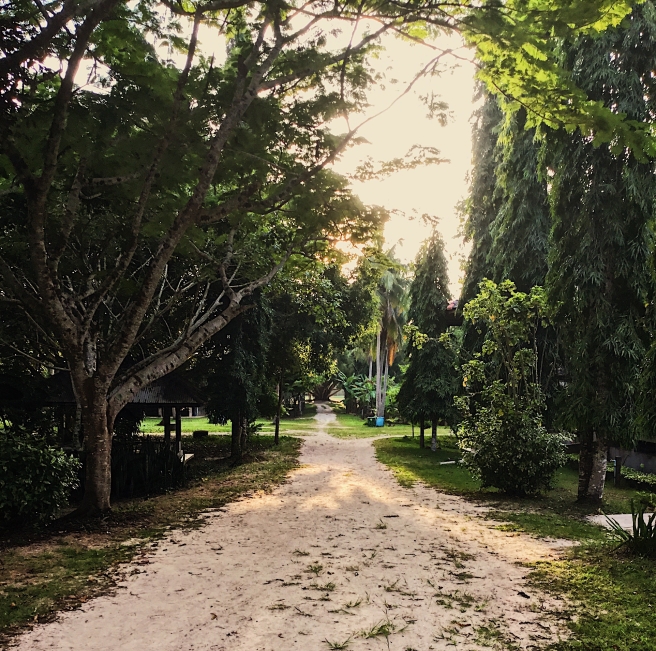 We also learned never (ever, ever) to complain about a mattress or pillow again.

Conner took the picture below at 4AM on the day before the retreat started, when we still had our cell phones.  The concrete slab bed & reed matting combination is a plush 6,800 on Sleep Numbers’ 0-100 scale, and the wooden block (which she affectionately named “Woody”) in the lower left corner doubles as both a pillow and mosquito-net weight.  This is the height of monastic luxury and comfort. 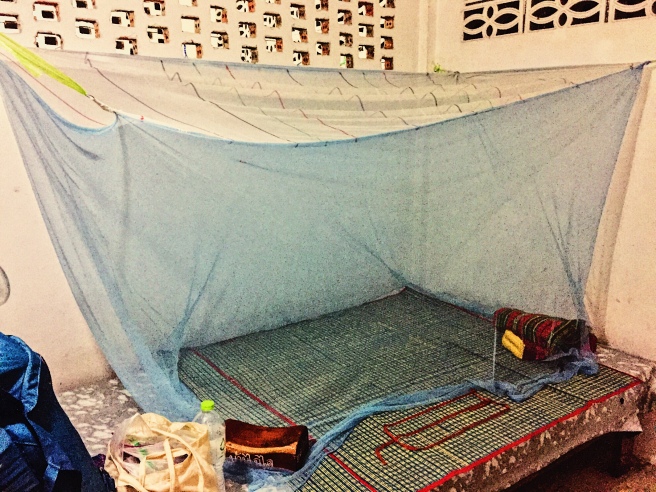 With our feet not quite back on the ground, we boarded a flight to Hong Kong, the last leg of our Asia travels. We last visited Hong Kong in 2015 and enjoyed the vibe: a tad frenzied, cheerfully vibrant, and with a dash of unapologetic, faded 1980’s-90’s grandeur.  It helps that delectable dim sum is also never far away! 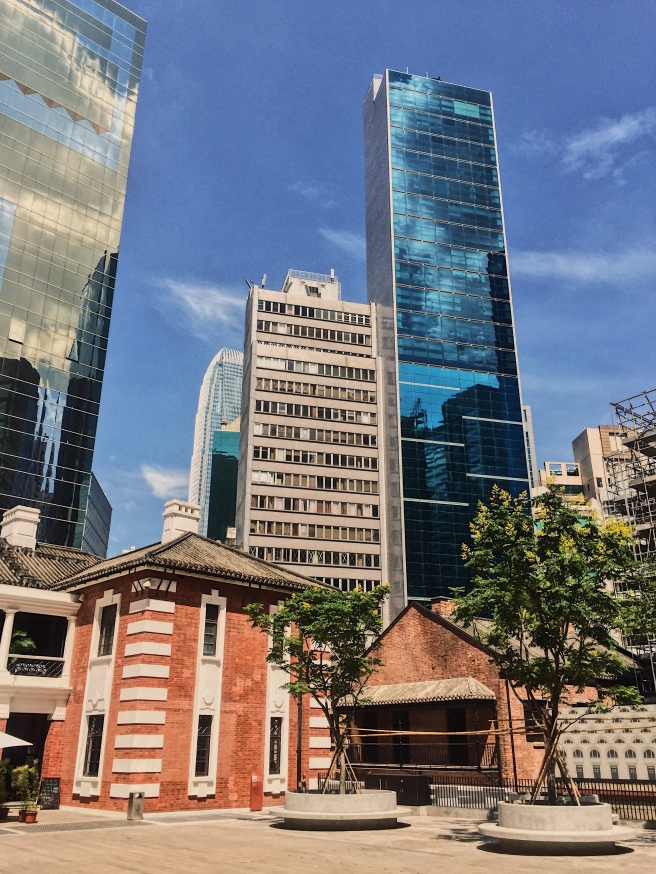 One of our excursions included a visit to the former Central Police Station and Victoria Prison. Each of the restored cells in the prison was dedicated to a type of punishment or discipline; below Conner is (mindfully) doing her time in Contemplation, but being a little too cheerful at it, if you ask this guard.

We avoided the typhoons that hit parts of Japan during and right after our stay (including the one that barreled into Kansai Airport in Osaka a few weeks after we left), but we couldn’t outrun Super-Typhoon Mangkhut, a Cat-5 hurricane equivalent whose wide path affected the Mariana Islands, the Philippines, Taiwan, South China, and Vietnam.  It was the strongest typhoon to hit Hong Kong since 1983! With wind gusts of up to 130mph, we were grateful to have a safe place to ride out the storm (and that Contigo was tucked into a marina on the other side of the world). 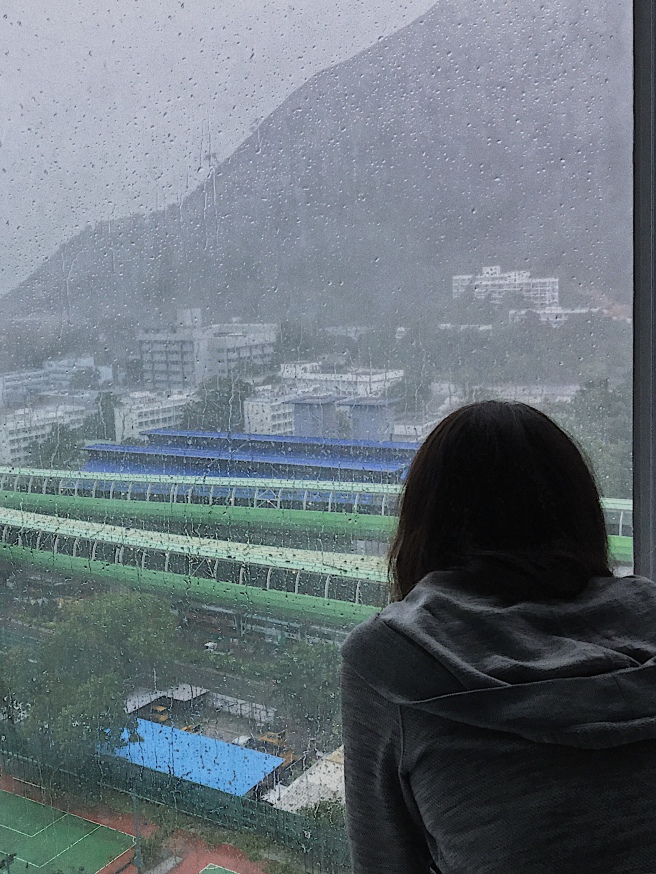 After a slight 18-hour delay, United Airlines delivered us to New York for a (far too short) two-day stopover on our way down to Mexico City to visit Karl’s brother and his family. We still managed to catch up with a few friends in NYC, including Karl’s night out with his former work colleagues (see below).  A big thank you to Jamie and Jen for once again being wonderful and gracious hosts! 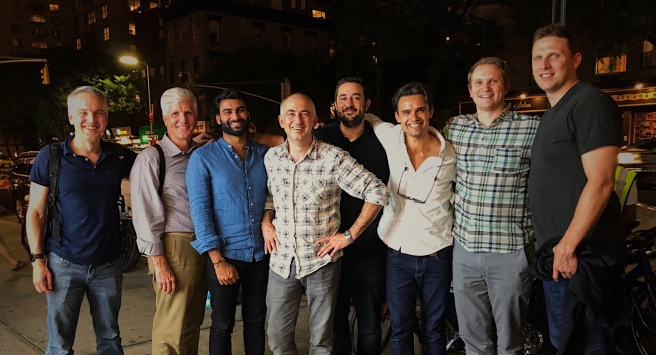 Karl’s brother James was transferred to Mexico City just as we were finalizing our summer travel plans earlier this year, so we happily added on a CDMX stop to our journey before heading back to Curaçao. 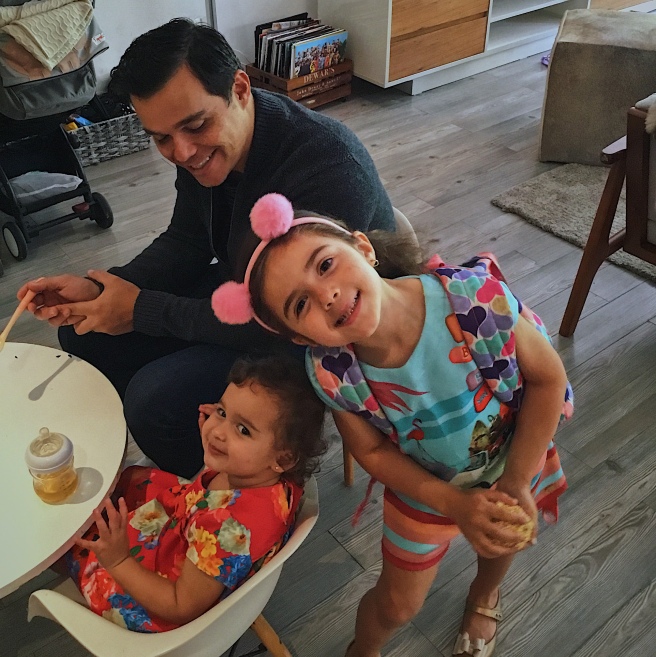 Though it had been eight months since we last saw them, Karl’s nieces Alessa and Niki gracefully (violently?) welcomed their beloved “Tio” into their new home 🙂 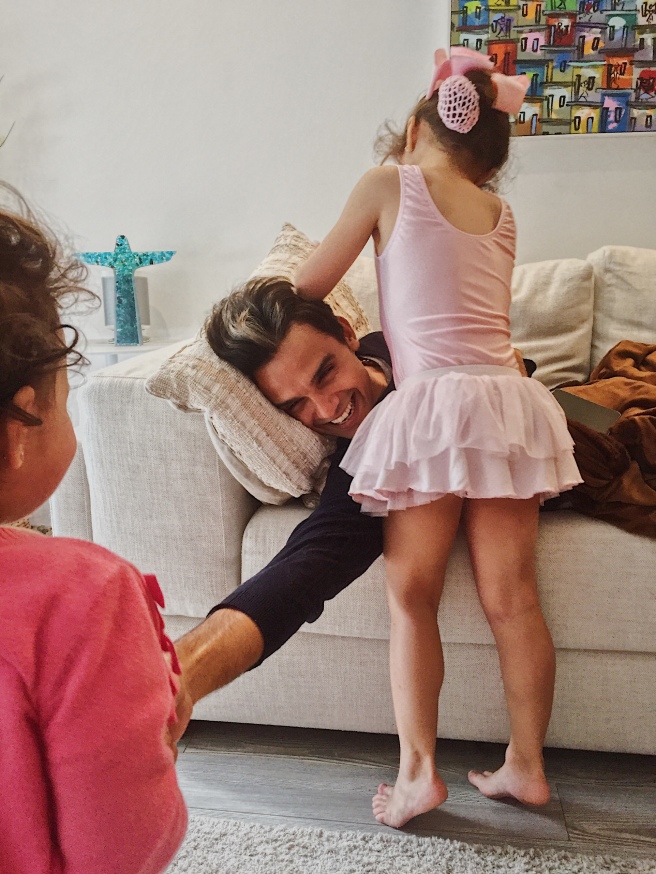 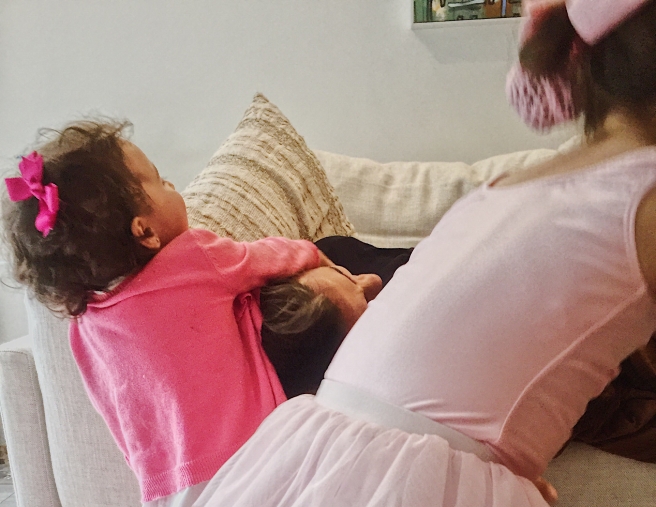 The pyramids at Teotihuacán are just a short day trip away from Mexico City, and were a nice three-dimensional follow-up to our visit of CDMX’s Anthropological History Museum the day before! 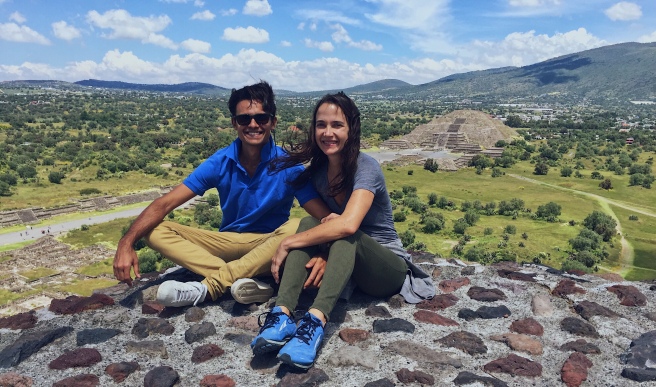 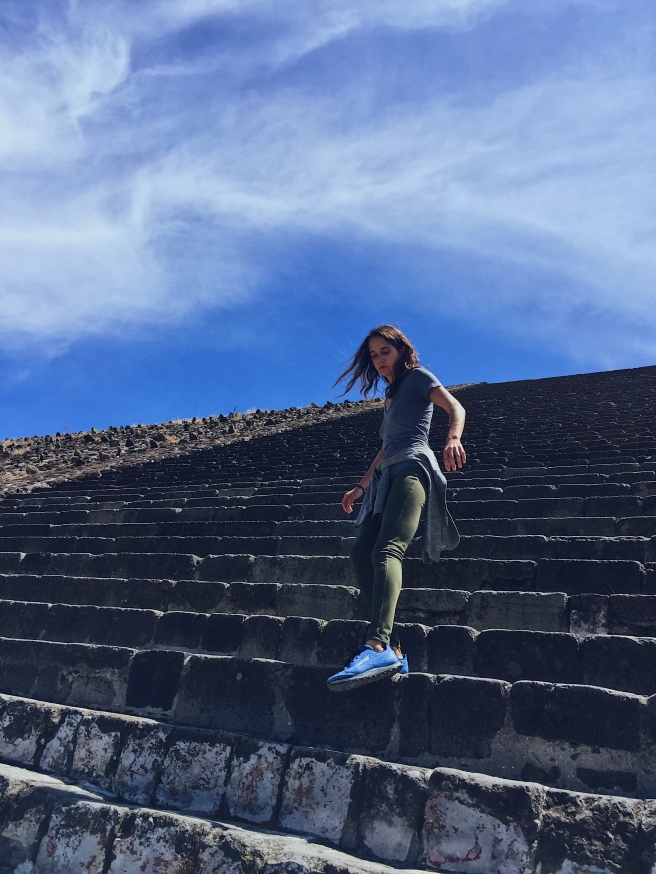 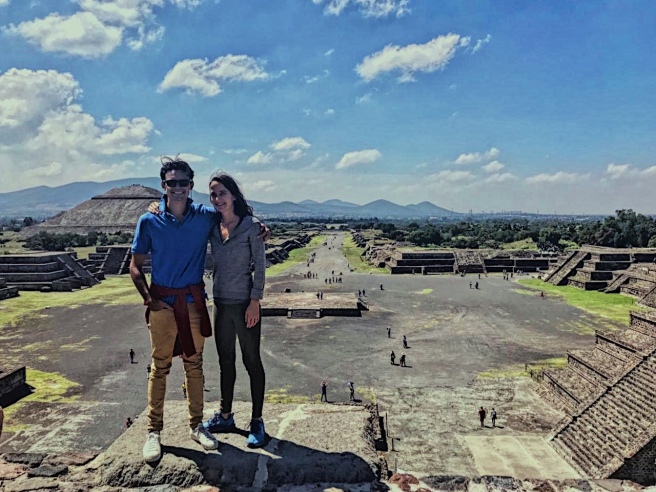 We also did a day trip to Cholula and Puebla. The market below in Cholula offered not only fresh fruits, vegetables, meats, and fish, but also a delicious breakfast served by an amazing no nonsense woman whom Conner is eyeing in awe. 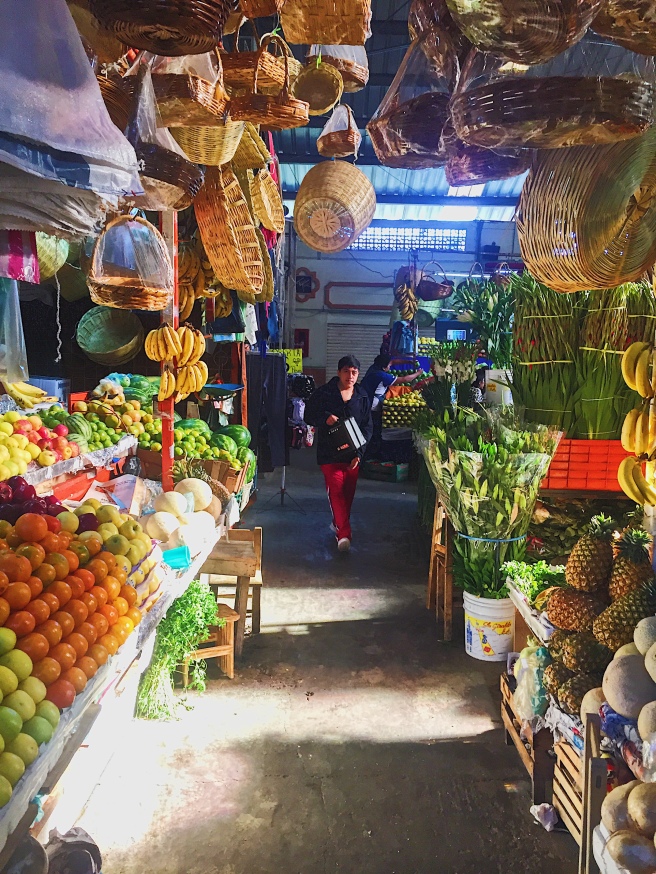 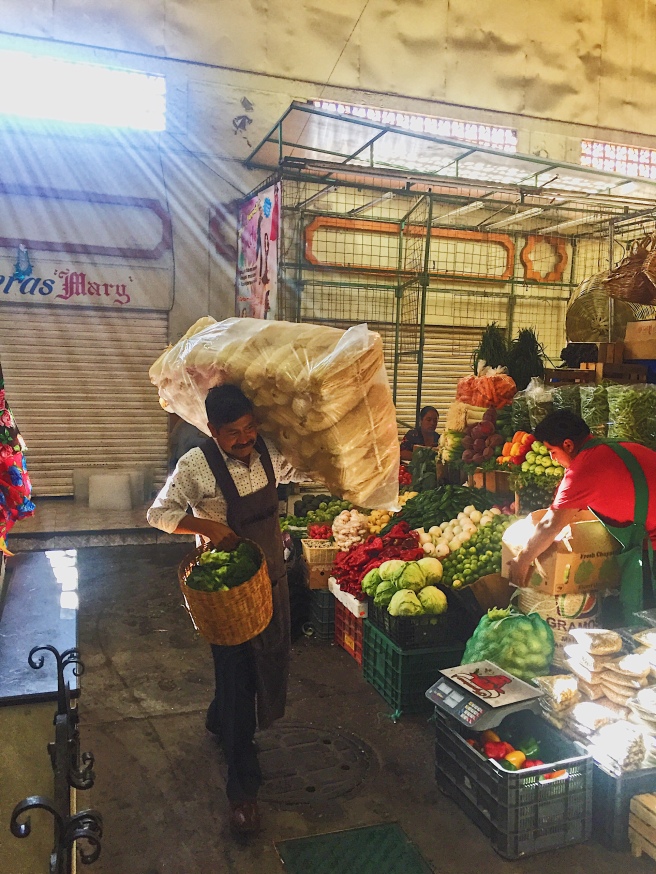 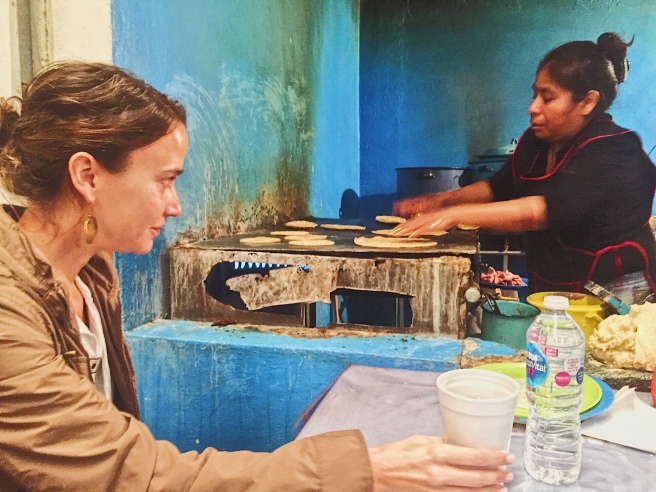 Our “veganish” diet was happily compromised in Mexico, which with its rich culinary history and delicious ingredients, really deserves to be grabbed by the taco horns.  Below, Hermanos Gerchow are shown barely enjoying their orders of chapulines (grasshopper) and escamoles (ant larvae).  Conner quietly crafts her next chapulín taco, bottom left in the picture. 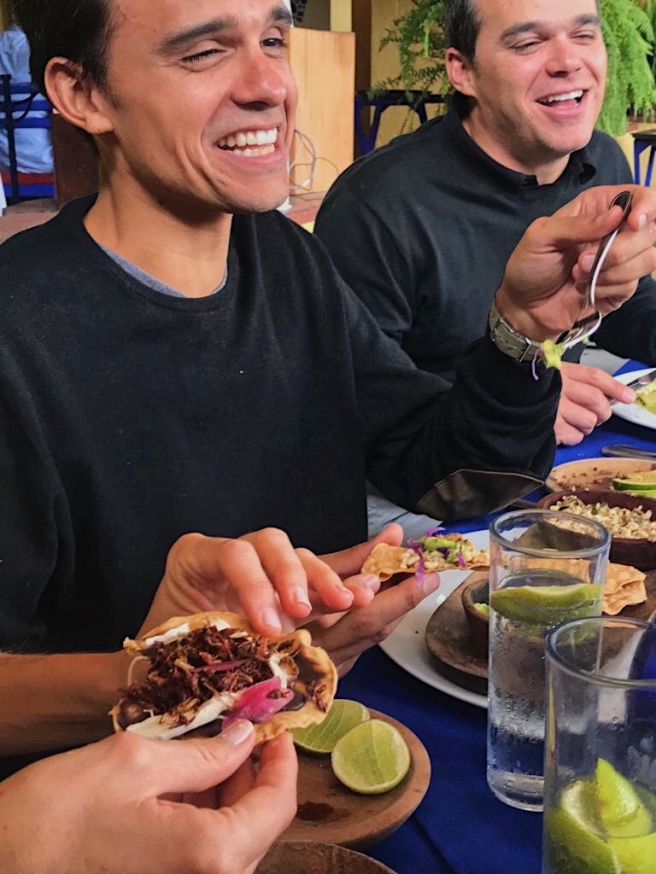 James and Addie, thank you again for hosting us in your new Polanco home!  Spending time with you and the girls was a dynamic ten-day (non-silent) counterpoint to our time in the monastery, easily as important.  We miss you guys and hope to see you soon!  Niki still has more asana postures to show Tio Charlie… 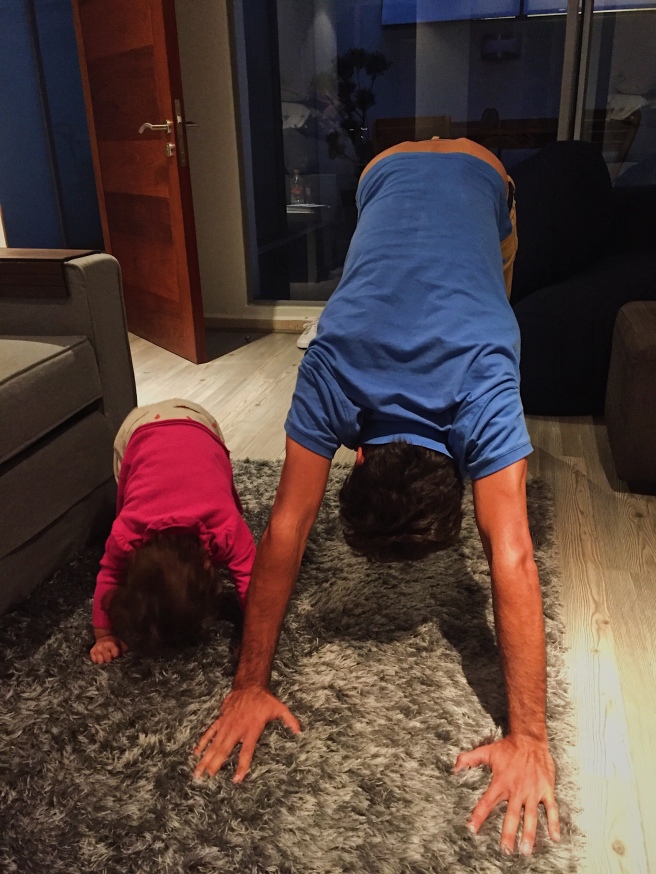 Back on the Boat

Okakora Kakuzō wrote in his seminal treatise, the Book of Tea, that the tea house is “an ephemeral structure built to house a poetic impulse.”  While the impulse to buy a sailboat is equally poetic, hauling Contigo out to complete annual maintenance reminded us that she is in fact a “depreciating vehicle constantly maintained to satisfy an (expensive) traveling impulse.”   We won’t bore you with the gory details, but rest assured, we spent money like drunken sailors (without the fun parts) upon our return to Curaçao. 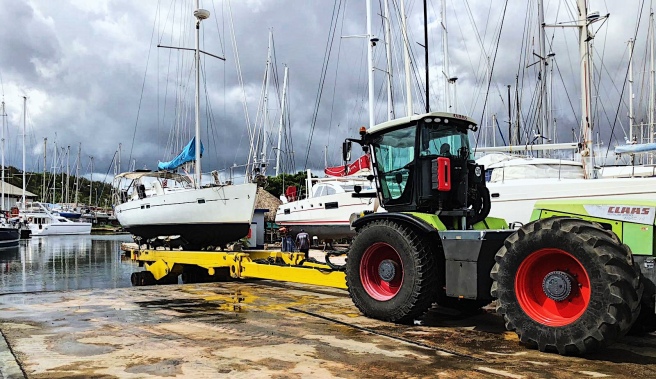 But we also got to play a little… 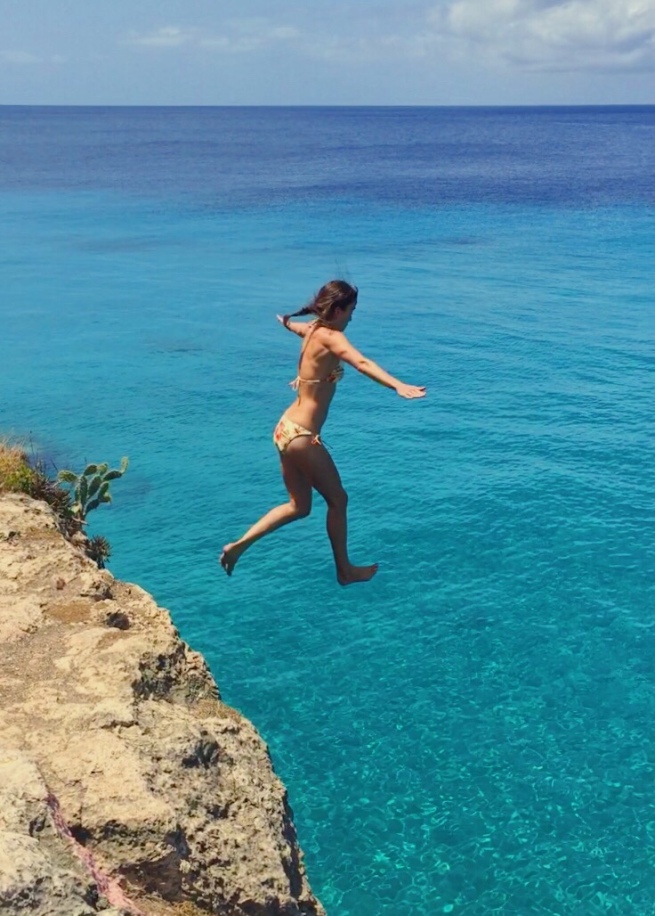 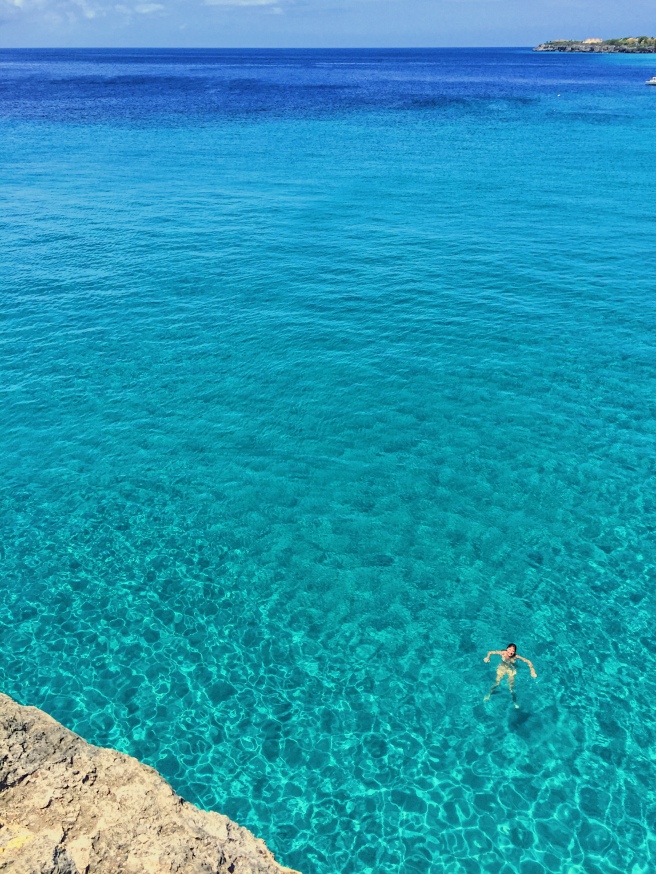 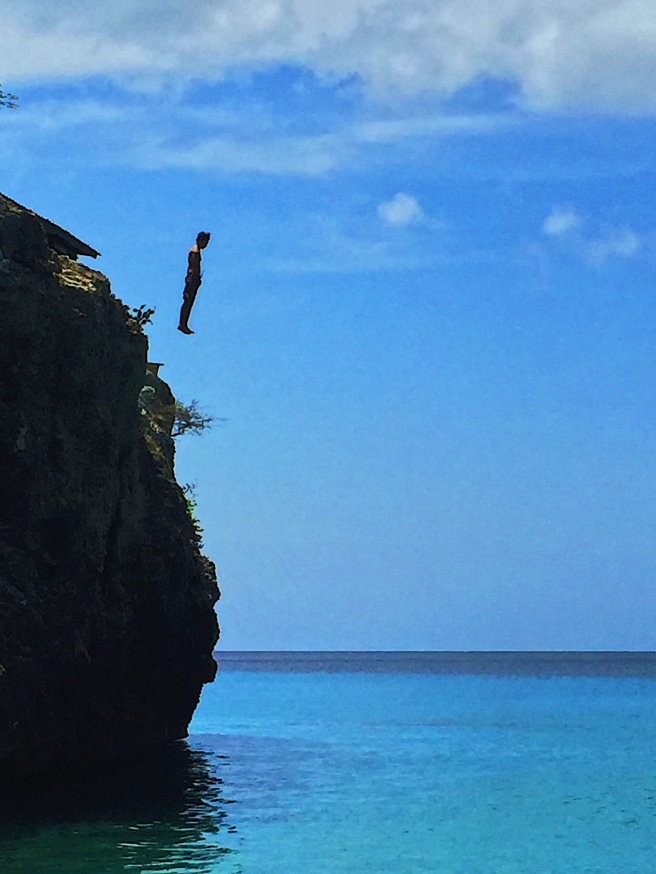 Our next installment showcases a great visit to Curaçao by the parental units and our continued journeys aboard our dear Contigo throughout the Caribbean.

Lots of love,
Conner and Karl

PS – Travel by Lightfoot, the publication that did a piece on us earlier in the year, included us in their bucket list issue!