We are cruising the Bahamas! After a (thankfully) uneventful crossing of the Gulf Stream from Lake Worth, Florida, we made landfall at Great Sale Cay in the Abacos on the third of December, and have been basking in island sun ever since.  Six months into our sailing adventure, we were averaging less than 1 monthly plunge into the sometimes murky (and always cold) waters found at Contigo’s stern.  We are happy to report that this number has since skyrocketed more than bitcoin, and swimming in azure Bahamian waters is now a daily occurrence.  It’s actually our shower: (1) ocean plunge, (2) soap lather on deck (birthday suits only if anchorage is sparsely populated, we aren’t European), (3) ocean rinse, (4) fresh water rinse.

Before continuing south, we brought Karl’s cousin’s family on board for an afternoon jaunt aboard Contigo. Our sail out into the Atlantic with them was fairly mellow, and it allowed us to size up the (somewhat choppy) St. Augustine inlet and lay down some tracks for us to follow on our way south the following morning.  Several hours later, we embarked to Stuart under the cover of darkness with satiated bellies, basking in the great company and treats – non-traditional (pizza, steak) and traditional (red wine for Conner) – that have become mainstay during our Thanksgivings (Year 3 and counting!) with the Bonilla-Cuesta clan.

The St. Augustine harbor proved to be a seasonally festive backdrop for post-sail wine and saying good-bye to Karl’s cousin’s family.  Ale and Vivi, thank you again for hosting us and we hope to have you on board again soon : ) 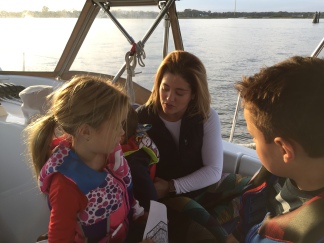 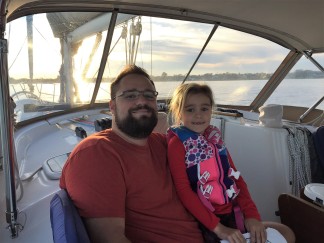 We decided to skip a side-trip to Orlando (Conner’s personal record of back-to-back Tower of Terror rides will remain unchallenged) and instead invested our Disney dollars in last minute provisioning, including squid lures that have subsequently proved irresistible to Bahamian mackerel. 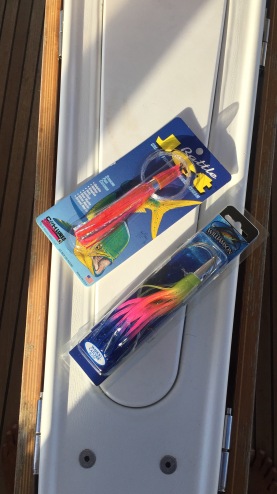 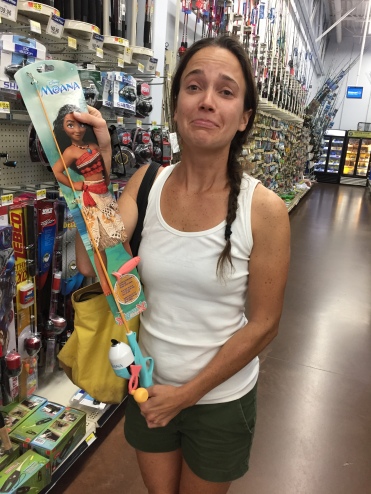 Last Minute Provisioning, Not Everything made the Cut

Following an overnight stop at Peck Lake, our last day on the ICW brought us to Lake Worth, where we fueled up, topped off water tanks, and filled up extra water, diesel, and gasoline jugs that we keep on board.  A long, hot day of motoring and negotiating bridge openings behind us, we gratefully zipped over to the anchorage nearest the inlet, which was filled with a large assembly of vessels; “Crossing the Gulf Stream” excitement was palpable! We spotted our new friends on Sea Yawl and Free Spirit, who invited us to raft up to them (Free Spirit’s new Mantus Anchor did all the heavy not-lifting). Rafting up made our departure at midnight that night much easier (no need to raise anchor, just toss back a few lines).  More importantly, we got a sweet send-off from boat friends whom we hope to see again soon!

Landfall and Customs Clearance in the Bahamas

After catching some rest at Great Sale, we sailed for Grand Cay the following morning, where we anchored outside the harbor and took Booey to clear customs on land. Check-in was smooth-as-can-be: the local customs officer was hanging out at Rosie’s Place (the restaurant / bar in town) and he had us cleared within 15 minutes.  Afterwards we sauntered over to the BTC store down the street, where we picked up a SIM card.  This took two hours for reasons that still remain unclear, but we happily passed the time chatting with another cruising couple who have been coming down to the Bahamas every winter for the past twenty years or so.

Before raising our Bahamian courtesy flag, we ran back to Rosie’s and shared a plate of delicious cracked conch.  These days, We. Can’t. Get. Enough. Conch.

Island Life on Board – The Tings We Love

Island life is treating us very well thus far.  Daily temperatures in the 75-degree range (barring one cold front, which brought 65) and plenty of sun are a welcome change from the cold and damp we were feeling coming down the ICW in November.

Warm and clear waters have invited more swimming, which has brought us closer to the local fauna.  Like when we got bullied off a reef by a toothy barracuda (very creepy the way he just kept following us) while snorkeling for lunch-time conch (shark exposure therapy for Conner), or a giant sea turtle lolling next to us on our way back to an anchorage in the Berrys.  Conner is also convinced that we zoomed past a reef shark when testing water depths through some shallow areas with Booey.

On the fishing side of things, Karl’s grandfather’s rod has brought us good fortune – though our technique for bringing fish onto the boat warrants refinement (that’s a nice way of saying that we’ve lost a few dinners to user error).

Importantly, Bahamian locals have welcomed us everywhere we have visited, always flashing a warm smile and infectious happy nature.

We are learning how to read the water to identify shallow areas that are best avoided. Sailboat (fin) keels are not designed for dredging sand, or worse, carving new patterns in coral. Shallow depths are the norm here and can be especially treacherous when combined with narrow passages (or “cuts”) in rage seas that can see breaking waves throughout one’s intended route.   But mostly, the water has just been plain awesome to behold.

Provisioning has not been too difficult; we’ve been pleasantly surprised by the food selection thus far (maybe a credit to the power of low expectations).  Yes, prices for some dried items are 2–3x what we would pay in the U.S., but produce like bananas, apples, potatoes, scallions, peppers, and ENORMOUS avocados have been relatively easy to come by.  Water is valuable in the islands, so we are now paying to fill up our onboard tanks ($0.30/gal was the opening salvo at Green Turtle Cay, probably the cheapest we are going to find), but we are averaging about 50–60 gallons a week (hard–core cruisers would consider this downright extravagant), so that’s an extra $20/week to the tab.

After a few hours on hold, we were able to cancel our U.S. Verizon cell service and had our numbers ported to Google Voice, which we now access using our Bahamian SIM card.  So to friends and family, henceforth, the best way to reach us is either via email or WhatsApp (the Google Voice call and text message relay features so far seem suspect).

Karl is the chef in residence wherever we are and the past month has required a cuisine “pivot,” so to speak.  Less than a month ago, we were flipping dough on granite counter-tops and making use of a fancy pizza oven in St. Augustine.  Now, we pound two conch shells into each other, hoping to coax out enough meat for an afternoon ceviche.

Mackerel #1 we caught, pickled overnight and served over bell peppers; Mackerel #2 we pan seared and placed over sautéed turnips, peppers, and scallions. We are still holding out for a nice tuna before tackling chirashi. We purchased a Hawaiian sling – the only type of spear fishing allowed in the Bahamas – and will be using that to (hopefully) add lobster and lionfish to our dinner menu.

While anchored in Devil’s Cay in the Berrys (on our way to Bimini, where we are now) we took Booey over to explore the local blue hole, which is basically a marine sinkhole and a marvel to see. After a quick walk through dense foliage, we stumbled onto a placid landscape of deep blue water – and the perfect ledge for cliff jumping! 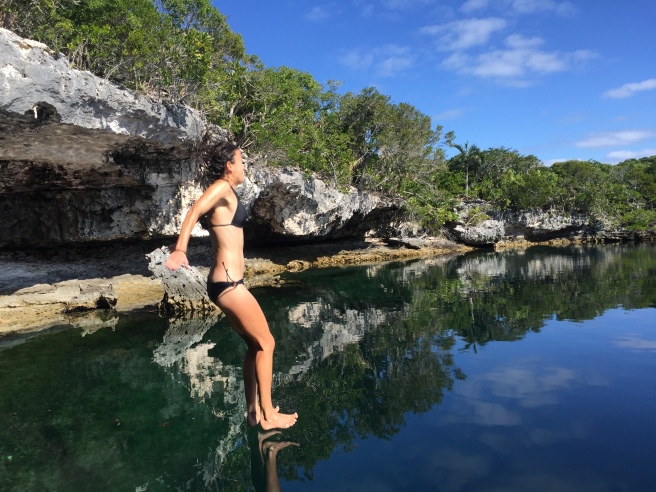 We are currently anchored in Gun Cay, south of Bimini, having just completed an overnight from the Berry Islands. We are anxiously awaiting Karl’s family who will be joining us on the 30th! Can’t wait to see you all!

16 thoughts on “First Taste of the Islands”