It has been some time since we posted our last update, and we have a lot to share about the time spent with friends and family in Costa Rica, Nicaragua, and Maryland… but it turns out that preparing a boat for launch is hard work!  There were items in our to-do list that required completion before Contigo went in the water and we sailed her away: bottom paint, propeller maintenance, renaming, selling Karl’s car, to identify a few.  Though tiring, it was also very gratifying work, and two weeks flew by in the blink of an eye. 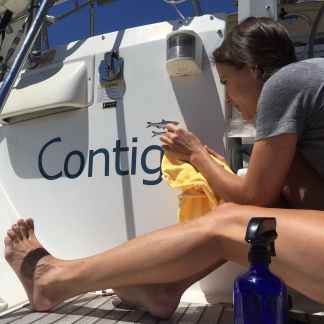 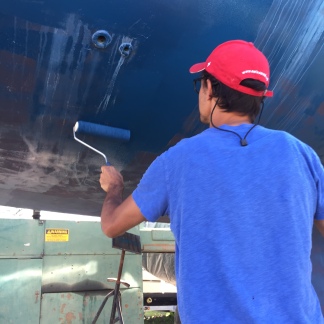 Filling in the jack stand spots 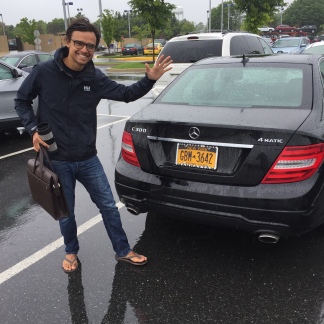 Having finished our “must-do’s on the hard” (we have a long and growing list of to-do’s on the water), we launched Contigo last Tuesday, May 16, into the C&D Canal just outside of the Delaware Bay.  We won’t lie – it was a bit harrowing to see the boat suspended in space and then settled into the water.  Given how narrow the channel is (and how green the skippers), the team at Delaware City Marina was kind enough to help us get Contigo safely to her berth for the night (thank you Charlie & Jack!).  Crashing the boat into the opposite muddy bank, or hitting the steel travel lift – as the boat that was launched 30 minutes before us did – was not how we wanted to start this adventure.

Backing out of the yard 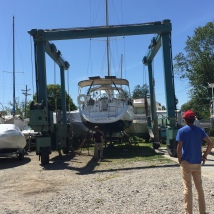 Lining up the lift

Two days later, we set off for our first anchorage in the northern Chesapeake Bay – a spot called Worton Creek.  After attending a weather briefing the previous night (more for the people that were sailing down the Delaware Bay, which can get nasty), we pushed off early Thursday morning.  It was a beautiful crisp morning, and we even had a mariposa (butterfly) friend join us for well over 20 minutes – she just kept circling the boat and coming back in through the helm station.  We took this all as a hopeful sign that the gods – wind, sea, and sail – had been sufficiently pleased with the impromptu naming ceremony we had held on the water the night before. 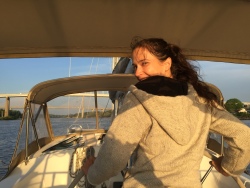 Cruising down the CD Canal

We arrived at Worton Creek in the early afternoon, and put up the anchor riding sail that Mrs. Helen Esworthy had so lovingly helped construct.  This small sail is intended to stabilize the boat while she is at anchor, and whether psychological or actual, it seemed to work!  We spent a few days at Worton, testing out the sunsets and new-found water that is on Contigo’s stern (we are so used to seeing a boat yard ladder and 10 foot drop). 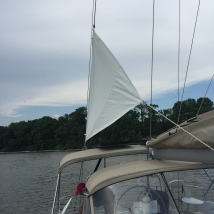 Our next port of call was a lovely sailing and crabbing town called Rock Hall, MD, where we tackled a few more projects on our to-do list, including marking the anchor chain and installing our brand-spanking new Spade Anchor.  Knowing how much chain is out is important given good seamanship requires letting out between 5-7x as much anchor chain as your anchoring depth. 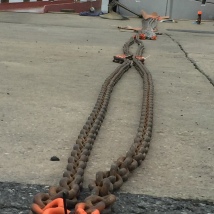 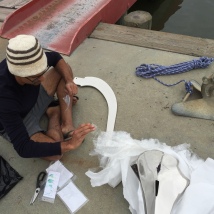 On Saturday, we had our first visitors aboard Contigo: Conner’s parents and Uncle Bob and Aunt Mary.  We explored the town of Rock Hall and enjoyed our first (of many, hopefully) round of crabs in the Chesapeake at Waterman’s Crab House.  The visit was a nice respite from boat work, the company was great, and the crabs delicious. 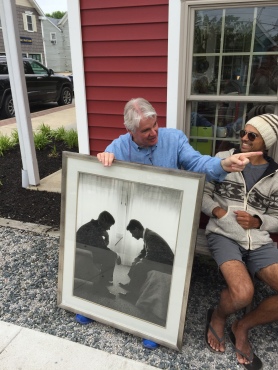 You Don’t Know Jack (or John)

And now we are off to Annapolis, wish us fair winds, and check out our live GPS feed in the Where Are We? page!

Much love,
Conner and Karl