Hard to believe, but it has been over one month since we launched Contigo! In that time, we have experienced a lot of “firsts” including: acquiring a dinghy (affectionately known as “Booey,” though Mr. Esworthy you do still have official naming rights), braving the Atlantic Ocean, and finding purpose for that mysterious black button in the galley next to our stove (pumps out excess water accumulated in the fridge).

Acquiring a dinghy was not quite as rigorous a process as deciding the type of boat to buy, but we still researched and considered many options for our “family mini-van.”  We had read many accounts of the joys (conveyance to sun-sparkled islands and Chesapeake crab eateries) and annoyances (shoulder-lifting heavy outboards and minimizing the inevitable damage brought on by UV exposure) of dinghys and took these into consideration when looking at our options. 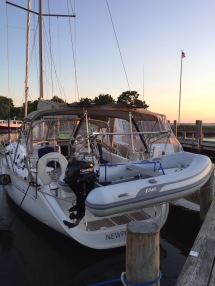 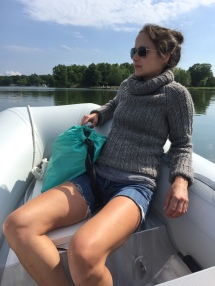 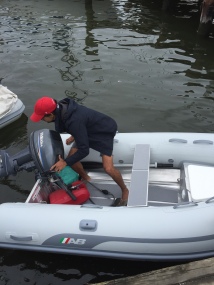 We won’t bore you with the details, but will recount the sad tale of our first outboard purchase. We opted for a used 15HP 2-stroke to tack onto our brand new 9.5-foot AB Hypalon inflatable. Conner had an informative conversation with another cruiser in the bathroom at Annapolis Harbor regarding the advantages of a 2-stroke over a 4-stroke outboard: mainly better power-to-weight ratios and easier servicing in the Caribbean. Sadly, after a short “spirited” ride outside the harbor, our new-to-us 2-stroke refused to start when next called upon to action at Annapolis’ Ego Alley – yup, that is Karl tangling with it above right. The dealer was gracious enough (even he couldn’t get it to start) to take back the 2-stroke and replace it for a new 4-stroke motor (above left). We joke that the 2-stroke took pity on us and decided to show his true colors before we ventured too far.

Southern Chesapeake
After we left Rock Hall – where we left off in our last post – we continued down the Chesapeake Bay, making our way as far South as Irvington in the Rappahannock River. Irvington holds a special place in our hearts and we couldn’t wait to return aboard Contigo. We had originally visited this part of Southeast Virginia to attend the wedding of Bailey (one of Conner’s friends from W&L) and Kevin a few years ago, and loved it so much that we returned a year or two later. One of our favorite destinations is the Dog & Oyster Vineyard, which in addition to having fantastic wine (the official sommelier on Contigo believes even non-Chardonnay drinkers will appreciate their crisp “Pearl” Chardonnay), also has a restaurant onsite that seriously delivers on fresh seafood fare. Their softshell crabs were so good that we had to order them twice. On Tuesday, June 6th, we celebrated Karl’s birthday (#33!) with a lunch at The Tides Inn, complete with celebratory ice cream and international calls to loved ones. 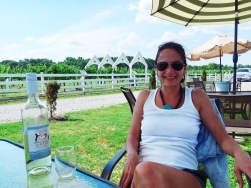 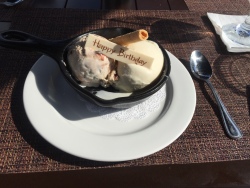 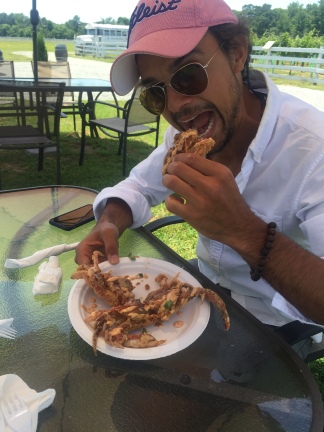 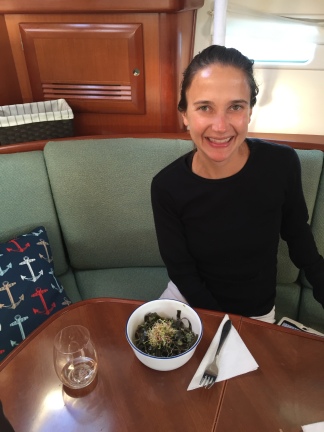 Annapolis/Oxford
We returned up to Annapolis via Oxford, MD, in the process acquiring or improving upon new skills such as successfully picking up moorings, docking stern-to in stiff breezes (wasn’t pretty), and navigating bascule bridges. Oxford was a beautiful place to explore: we borrowed bicycles from the marina, and after a day full of laundry and cleaning both of Contigo’s heads (bathrooms), we treated ourselves to a meal at the Robert Morris Inn and more ice cream. 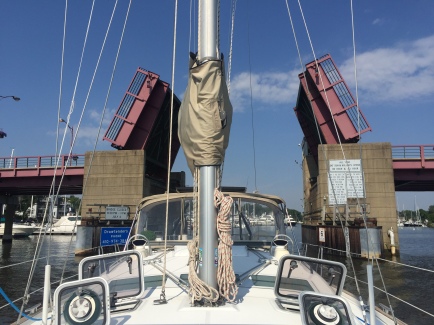 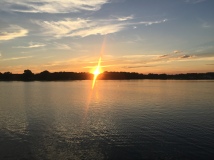 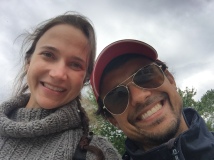 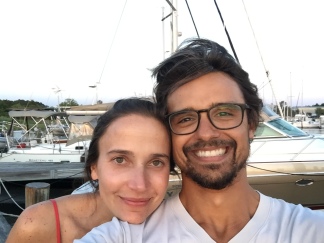 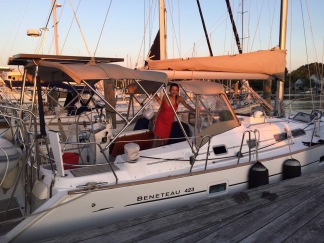 Steady March to NYC
After leaving Annapolis, we started our multi-day exit of the Chesapeake Bay, transit of the C&D Canal, ride down the Delaware Bay, and entrance into the Atlantic. In the case of the latter, we opted for the less beaten path, and headed for Lewes, DE, which is right across from Cape May at the mouth of the Delaware Bay. We departed Lewes on Friday, June 16th at 7AM, and after only 23.5 hours, dropped anchor in Sandy Hook, NJ, just below the NY state line! The non-stop trip up the New Jersey seaboard was a foggy one, and even though we stayed within 2-3 miles of the shoreline, we never once saw New Jersey until rounding Sandy Hook.   Contigo’s radar feature went from nice-to-have to thank-God-we-have.  The picture below left is how our radar return looked all night… 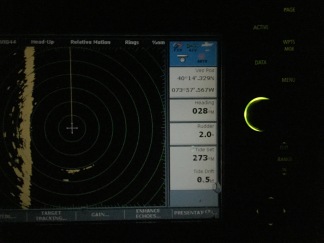 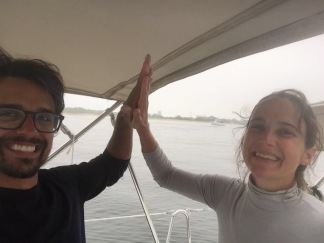 And yes, we pulled an all-nighter, which even featured the 3AM natural rush of adrenaline/dopamine that we came to know so well working as banking analysts many years ago. 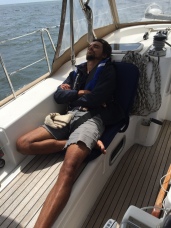 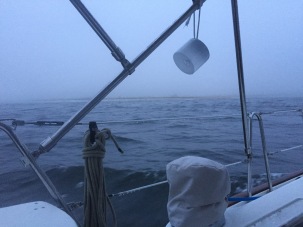 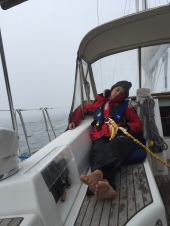 After some of Karl’s delicious scrambled eggs and a four-hour catnap, we moved Contigo to Sheepshead Bay in Southern Brooklyn, where we picked up a mooring for a few days and took the subway into the city. On our last night in NYC, we moved the boat to a marina just a few blocks away from our old apartment in Brooklyn with amazing views and better proximity to friends. 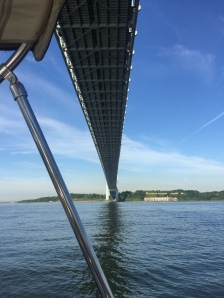 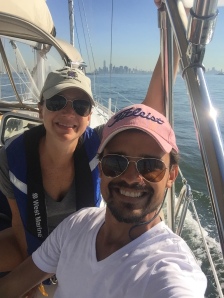 Leaving NYC
Reuniting with close friends in Manhattan and Brooklyn was a real treat, and sometimes it felt like we could cut our nostalgia with a knife.  That’s Contigo below right, docked in front of the Financial District, day and night. 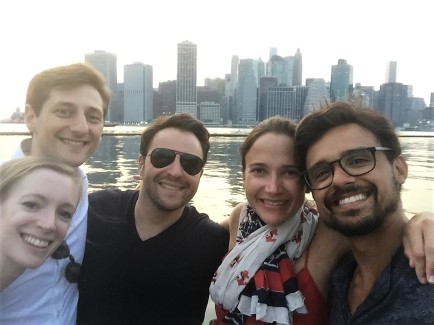 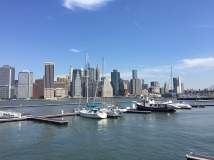 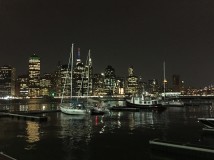 That said, we aren’t looking for any grass (or barnacles) to grow under our feet, so last Friday we made for the Long Island Sound at first light.  Traveling up the East River with a favorable current, we used Sven (our Volvo D2-55 Diesel) mostly for steerage. Karl spent the better part of the trip with an Andy Dufresne-esque smile on his face as he watched the rush-hour traffic build on his old commute up the FDR Drive.  A little later on, Conner had her share of fun watching airplanes zoom over us on approach into LGA, just before we cleared the last two bridges – Whitestone and Throgs Neck – that signal the start of the Long Island Sound. 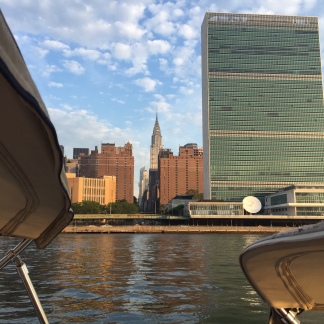 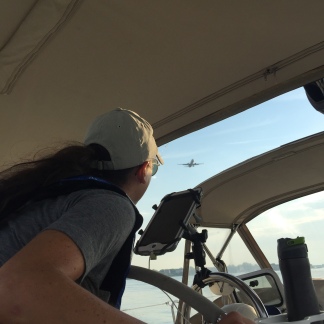 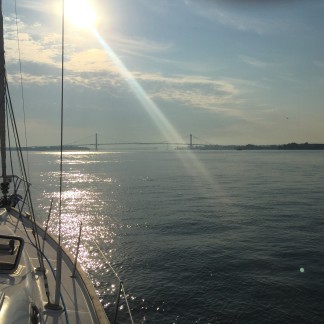 Long Island Sound & Beyond
Our first stop in the Sound was Oyster Bay, which has several beautiful spots to anchor nestled in between the trees/bluffs/grand estates. After two sun-filled evenings, we crossed into Connecticut and anchored between Greenwich Harbor and the Greenwich Islands. We have since been meandering about the Connecticut shore, including a visit to Karl’s family friends’ house on the Sound in Westport (thanks again Fosters!) and a visit to the newly opened rubber duck store in Essex just today!  Next stop is Gardiner’s Bay and Sag Harbor! 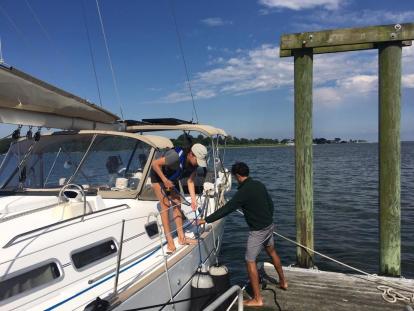 Much love,
Conner and Karl