March 2018 –
We made it to the DR, having made landfall last Saturday morning in the small protected harbor of Luperón on the northwest coast of the country, 45 nautical miles east of the border with Haiti. We opted to skip Turks and Caicos – which we’d visited by air several years back – and jumped straight from Atwood Harbor in the Bahamian Acklins to Luperón on a two night run around the north side of the Caicos Bank. We’d been told Turks is even more expensive than the Bahamas, which seems hard to believe after paying $8 for a humble cabbage at Staniel Cay’s Pink Store.  Now, we sit firmly on fertile Latin soil, where whole (perfectly ripe!) papayas are $1.20 and pineapples less than $1! 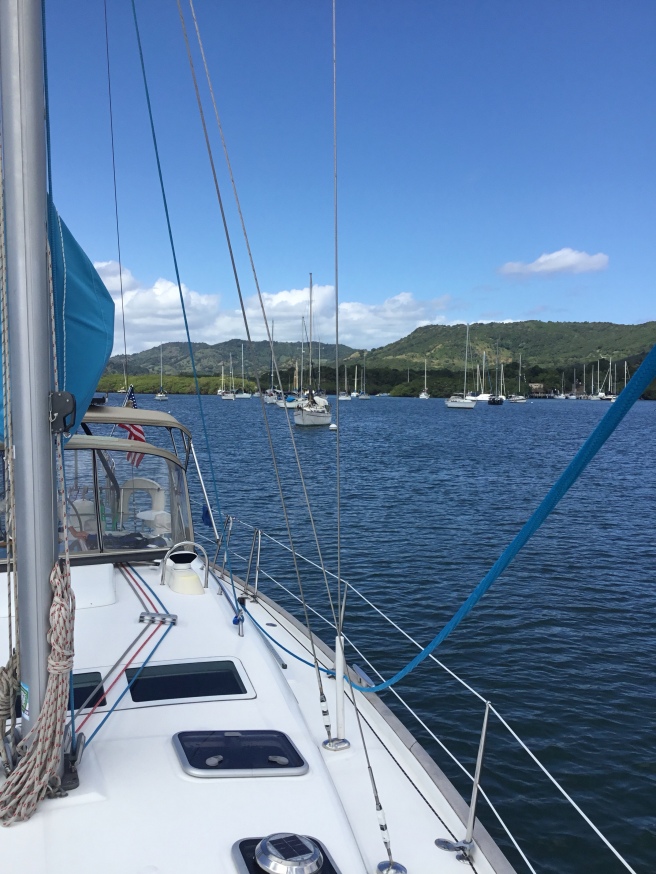 Bahamas Recap
Once the weather mellowed out in February/March, so did we. The strong cold fronts of January abated and we had a great time exploring the Bahamian Exumas, as well as tiny bits of Long Island and Acklins. We are pretty sure we are spoiled for life on what a beautiful sandy beach should look like. 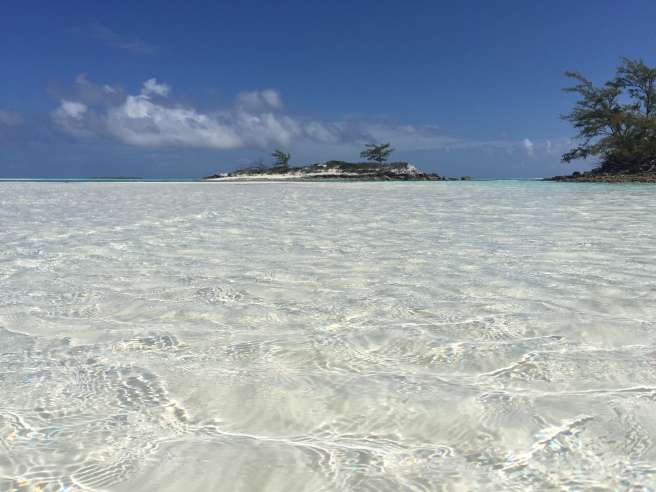 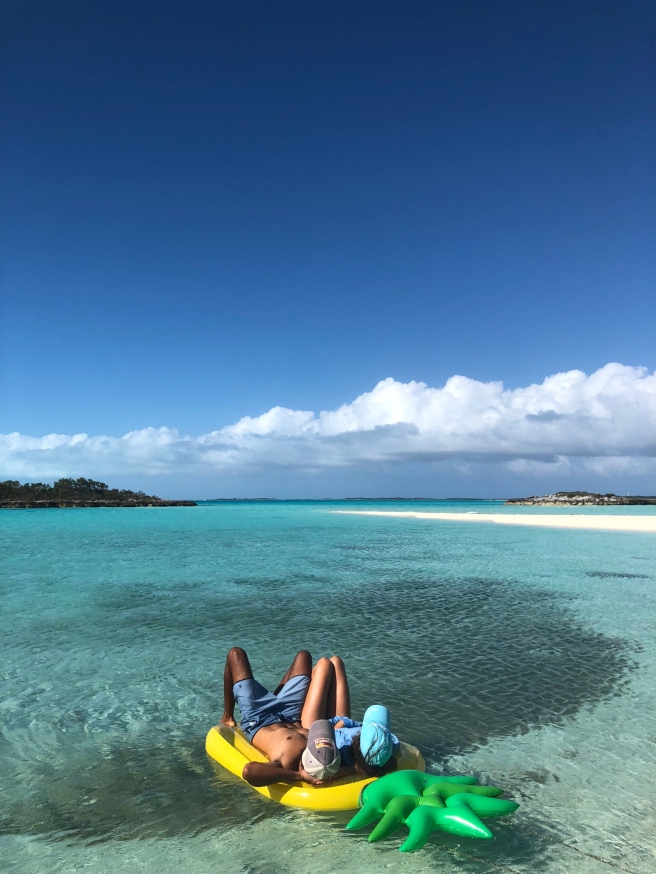 While we still cannot claim we are eating from the sea 3-4 times per week (a stat some salty sailors shared with us back in the Abacos), we are happy to report that our fishing luck has improved.  On an ocean-side run down to George Town, we caught our first yellow fin tuna, which Karl mostly preserved in mason jars, guided by an Italian conservata recipe that is serving us in good stead. 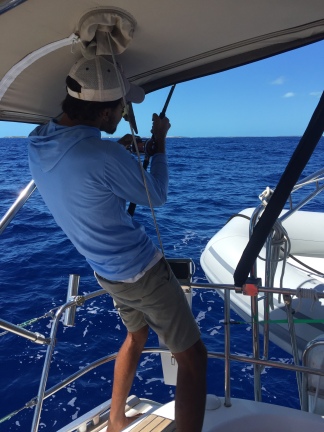 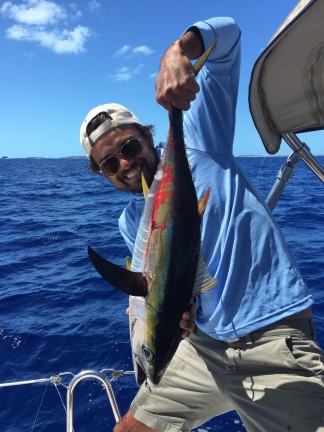 Later, on the way to the Acklins, we caught a nice mackerel and a bonito tuna. Karl took advantage of calm seas to filet on the transom while we were underway. He had no sooner finished filleting the first one (and cleaned up) when the line whirred again!

That night we had sashimi for dinner, the remainder became a conservata that we are still eating almost two weeks later. 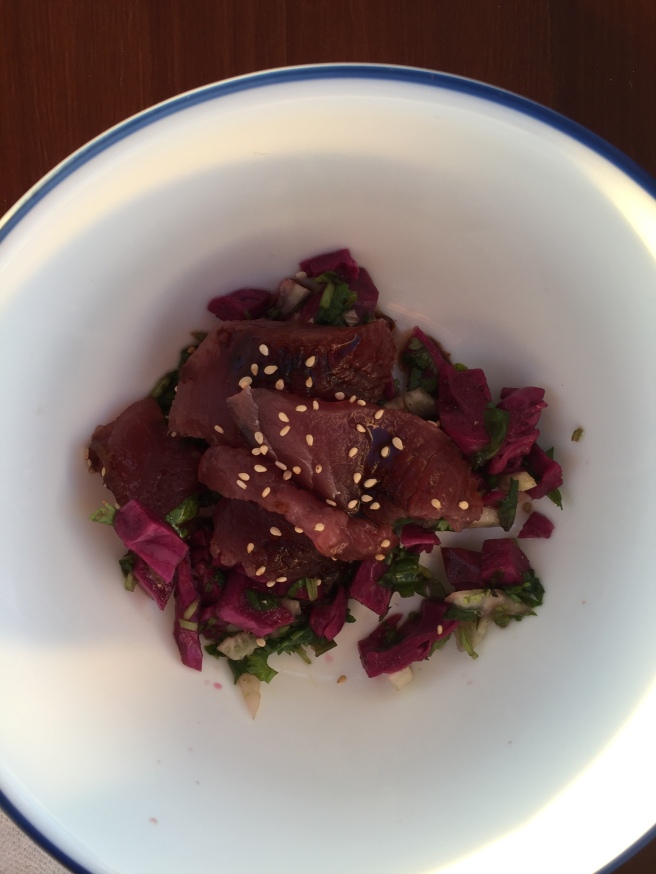 February and early March marked visits by friends and family aboard Contigo. First, Conner’s parents celebrated their second stay on Contigo (the first being in San Domingo Creek in St. Michaels’). We spent a night at Emerald Bay Marina so we could reacquaint them with boat life, then sailed north to anchor off of Lee Stocking Island for a couple of nights. They got a good taste of daily life on board, down to the daily swim followed by (fresh water) transom showers!

We next welcomed aboard NYC friends Blaine and Lauren, who stayed at Staniel Cay Yacht Club and graciously offered to us many of their land-based amenities including hot showers, bikes to ride to the grocery store, and a porch to do yoga. Together we took day trips to nearby jaunts including the inviting sandbar near Little Rat Cay, the downed plane near the Yacht Club, and the infamous Thunderball Grotto.  They also graciously donated their floaties to us at the conclusion of their trip. 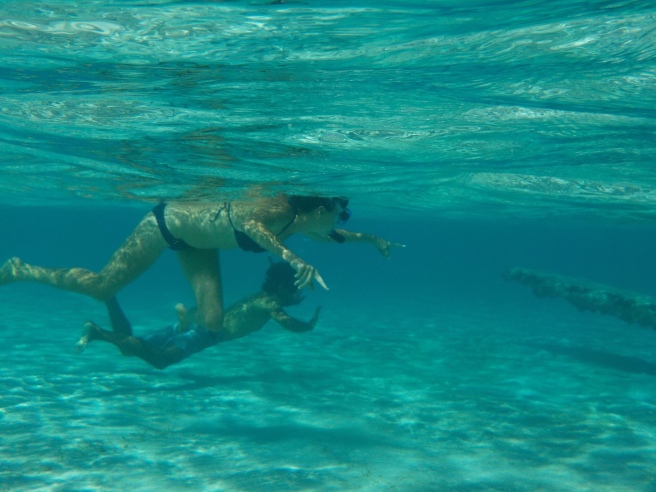 One of the East coast’s many snowstorms delayed our next visitors, Andres and Rachel, but it ended up working out best for everyone, as it gave us time to further troubleshoot an enduring tangle with our macerator and various other (unpleasant) head-related grievances.  The toilet bowl is sitting on the dock in this picture.  Boat life! 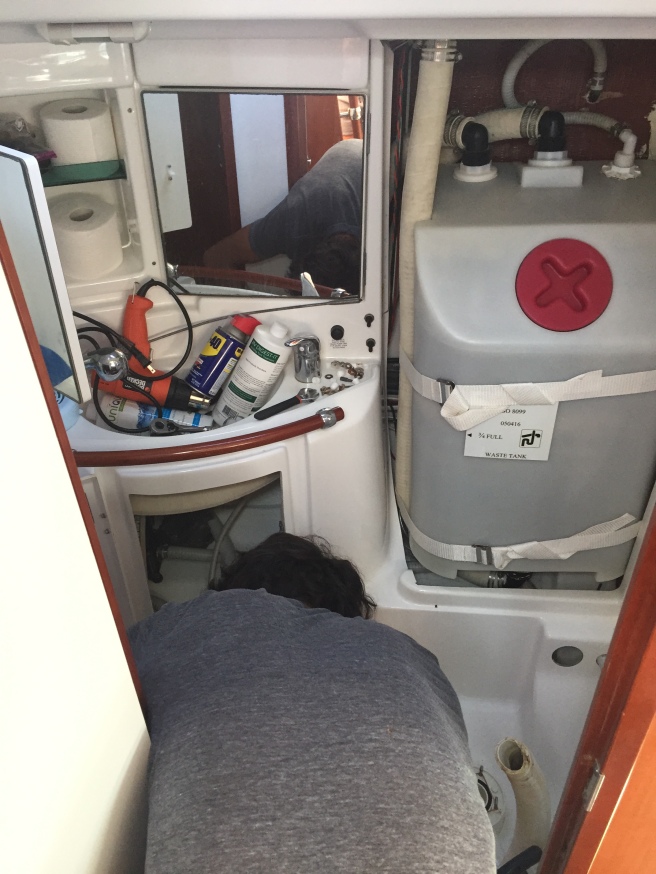 Several days later, Andres and Rachel arrived, bearing a bounty of food (pictured) and boat part (unpictured) gifts. This stuff was pure gold in the Bahamas. 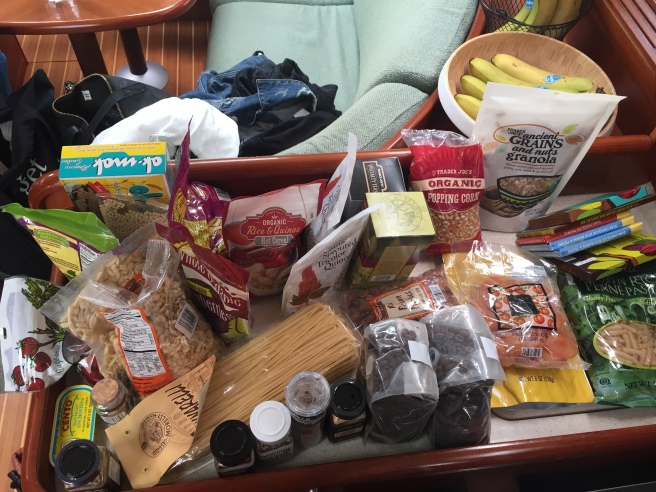 Andres kept busy hatching up creative ways to cook our food.  We used our Hawaiian sling as a spit and roasted a leg of lamb, while Karl joked (sadly) that this was the only animal that has been on the spear since we purchased it at Marsh Harbor in December.  Andres also charred some leeks directly on the coals, for which Karl whipped up a Robinson Crusoe-like serving platter. 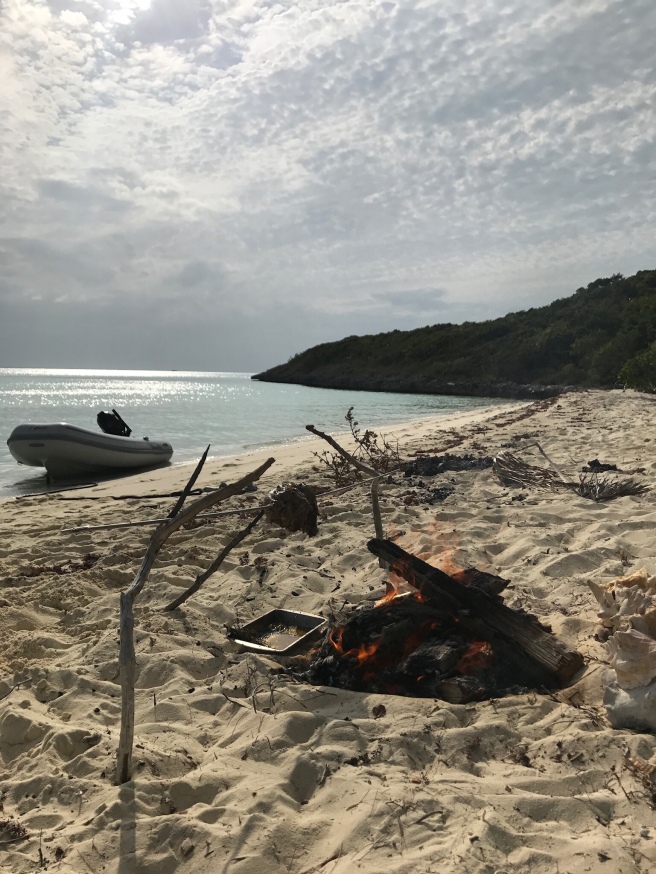 The girls enjoying the floaties.  Blaine’s Pineapple Express is no longer with us, RIP.

Dominicana
As our four month visa to the Bahamas was up at the end of March, we started looking at weather windows to go south once we bid Andres and Rachel (a sad) farewell.  We decided to follow a weak cold front south east, which disrupted the prevailing easterly winds and allowed for some nice beam and broad reaching in 15-25 knots of wind for the multi-day run down to Luperón.

After months spent touring the beautifully salty, flat, but barren Bahamian islands, the DR is an assault of the senses of the best kind.  Yesterday, Luisa la Ciega massaged our stiff winch-grinding back muscles for $6/hour.  While Luisa was tending to Karl, Conner struck up a conversation with Luisa’s sisters about her need for a haircut. Before she could say tijeras, presto, this had happened:

Earlier today, Karl had an appointment with a welder to saw-off our corroded dinghy engine lock (another story) – a job that was a bit messy – for a grand total of $4.  And most importantly, we are finding the people in Luperón incredibly nice.  We may never leave? Some derelict boats in the harbor clearly haven’t.

Lastly, Lightfoot Travel did a little piece on us, which you can check out here!

A Few More Pictures Since it’s Been Two Months!

Our pet remoras Lea & Perrins:  these trusty two hung out underneath the boat for several days, fighting each other for any leftover scraps that we happened to toss overboard.

About 3 minutes after the picture below was taken, a boat tour group showed up and that little green umbrella became a hot ticket item for literally 10+ selfies.

We lost a beach towel overboard one windy night, and we (Conner, mostly) grieved.  The next morning, what do you know, we see a blue and red blog tumbling across the anchorage floor.  Seriously, Conner doesn’t get much happier than this.

Seaplane landing in the middle of the Big Majors anchorage, headed for Pig Beach.  We frankly had a hard time wrapping our heads around the apparent allure of seeing pigs swim (especially when one is notorious for biting).  Seaplane + beautiful blue waters, however, got Karl dreaming of flying again…

Contigo sailing gently along the bank, en route back to Big Majors, near Staniel Cay.