October 2017 –
The year’s busy hurricane season continues to be a planning factor, reminding us (to use an oft quoted trope) that cruisers’ plans are best written in sand… at low tide. We had intended an offshore run from Montauk to Cape May, but Jose’s lurking about the Atlantic encouraged us to continue due west, staying within the shelter of the Long Island Sound.  This allowed one last visit of New York City, where we saw friends and took advantage of NYC’s abundant grocery options to restock Contigo’s galley.

Ah, the Big Apple.  In an hour, it managed to deliver the horror of watching a man fall between the tracks and stationary subway, followed by his boisterous arrest for public intoxication… it did not dawn on him that relieving himself in public not 20 feet from where we stood (not for fun, but awaiting the six train) was sufficiently incriminating.  As we exited the next subway station, we watched two drivers nearly come to blows following a slow-motion, “block-the-box,” game of chicken fender-bender.  Why bring all this up?

En Route to the Chesapeake Bay
We picked what we thought was a favorable weather window to make our fourth overnight, this time from NYC to Cape May.  This is the same run that we did earlier this summer, then northbound.  We were hoping to actually see the NJ coastline this time – pea-soup fog prevented us from doing so on the way up. We got our wish, but unfortunately the following morning’s forecast proved a tad wrong, and stronger-than-anticipated winds and chop made for a wet arrival into Cape May.  Not terrible, but it did leave us with signature wind burns on our faces!

We were joined on the trip by the lovely crew of Aquila (Bill and Michael), whom we met in Essex, CT while waiting for Jose and Maria to pass.  Conner took us on a long ambling walk, which shockingly terminated at the local winery.

Cape May Winery (Can’t Speak for the Wine)

We left Cape May under sunny skies and (carefully) hugged the coastline at slack tide and fairly low winds, taking a local mariner’s advice to “continue until you can see bathing suits on the beach, then turn north.”  Of course, timing the tide meant we got into Delaware City after dark.   The Delaware Bay was calm enough that we could have anchored en-route and before dark, but we were looking for fresh water and Contigo needed a bath after the wet sail down the New Jersey coast, so we soldiered on.  We kept her at Delaware City Marina last winter, so we were familiar with the approach.

Delaware Bay, Probably as Calm as it Gets

The Chesapeake
On one hand, stopping by DC Marina felt like coming home given all the time spent there earlier this year.  On the other, returning to familiar places on our way south has also brought home how much we are learning (or conversely, how little we knew just six months ago) on our trip.  Same waters, higher comfort-level.  Which isn’t to say that we aren’t still squarely in the orange triangle shown below, know it, and respect it.

So we re-transited the C&D Canal (fourth time in a year!) and were greeted with sunny skies as we entered the Chesapeake Bay! After spending the evening in one of our favorite anchorages (Worton Creek), we continued south to Hart Miller Island, Pasadena, and then Annapolis.  We rented a car in Pasadena to visit the Annapolis Boat Show and provision.  Sitting in Friday rush-hour traffic brought back traumatic memories for Karl. With traffic stopping, then going 80 mph, and then suddenly stopping again (with the occasional car spilling into the shoulder to avoid an accident), driving felt more dangerous than anything we have yet to do on the boat, all joking aside.

Annapolis
We take our daily fresh fruit and coffee breakfasts while listening to podcasts. One of our favorites is On the Wind, hosted by Andy Schell, who leads offshore passages with his wife Mia in between conversations with interesting people in the cruising community. They also host workshops and it just happened to work out that we arrived into Annapolis for their rigging and sail repair workshop. Luckily one spot had opened up when we emailed Mia in the off-chance that they could accommodate us. We split the instruction, so Karl attended the rigging workshop while Conner tackled sail repair.  That is Conner and Mia below right, gray-bearded man on stage on the left is none other than master rigger Brion Toss. 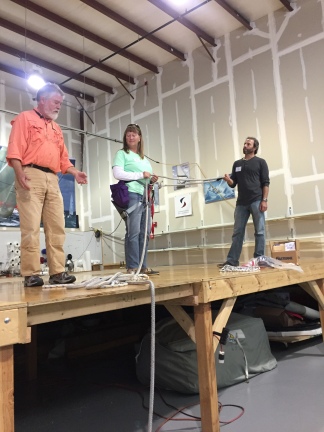 Boat Work
As anyone who has lived on a boat knows, cleaning and maintenance is an everyday affair, with each of us having our moments aboard.  We tackled some more projects in Annapolis: a main preventer set-up, new blocks and lines to improve sail handling and jib furling (to those whom that means anything at all).  Karl fixes an indecisive shower pump switch on the left, while Conner dives into mold-control work with gusto on the right.

And Onward..
We are happily revisiting favorite spots on the Chesapeake (currently in St Michael’s) and slowly making our way down to Norfolk, VA, where we will enter the Intracoastal Waterway on or around November 1.  We had a gusty sail down from Annapolis yesterday, winds from behind, and got to test some of the new gear!

Until next time, love,
Conner and Karl

A sailor does not use his love of the sea to find his bearings, he uses a sextant, and makes sure that its mirror is clear.  If our mirror is not clear, we will see nothing of the reality of things and beings, because we will find everywhere the reflection of our desires and fears.

–Sri Aurobindo or The Adventure of Consciousness*

*In the column of crazy coincidences, we are currently reading and practically had in hand this book (one of small truckload we picked up in India earlier this year) when we heard, on another sailing podcast that we are listening to, that it served as inspiration to French Canadian sailor Yves Gélinas.  We had an opportunity to meet Yves as the Annapolis Boat Show, where he autographed his book detailing his solo, non-stop circumnavigation via the southern oceans some 30 years ago.